The internet is full of lies and lists.  And lists of lies. 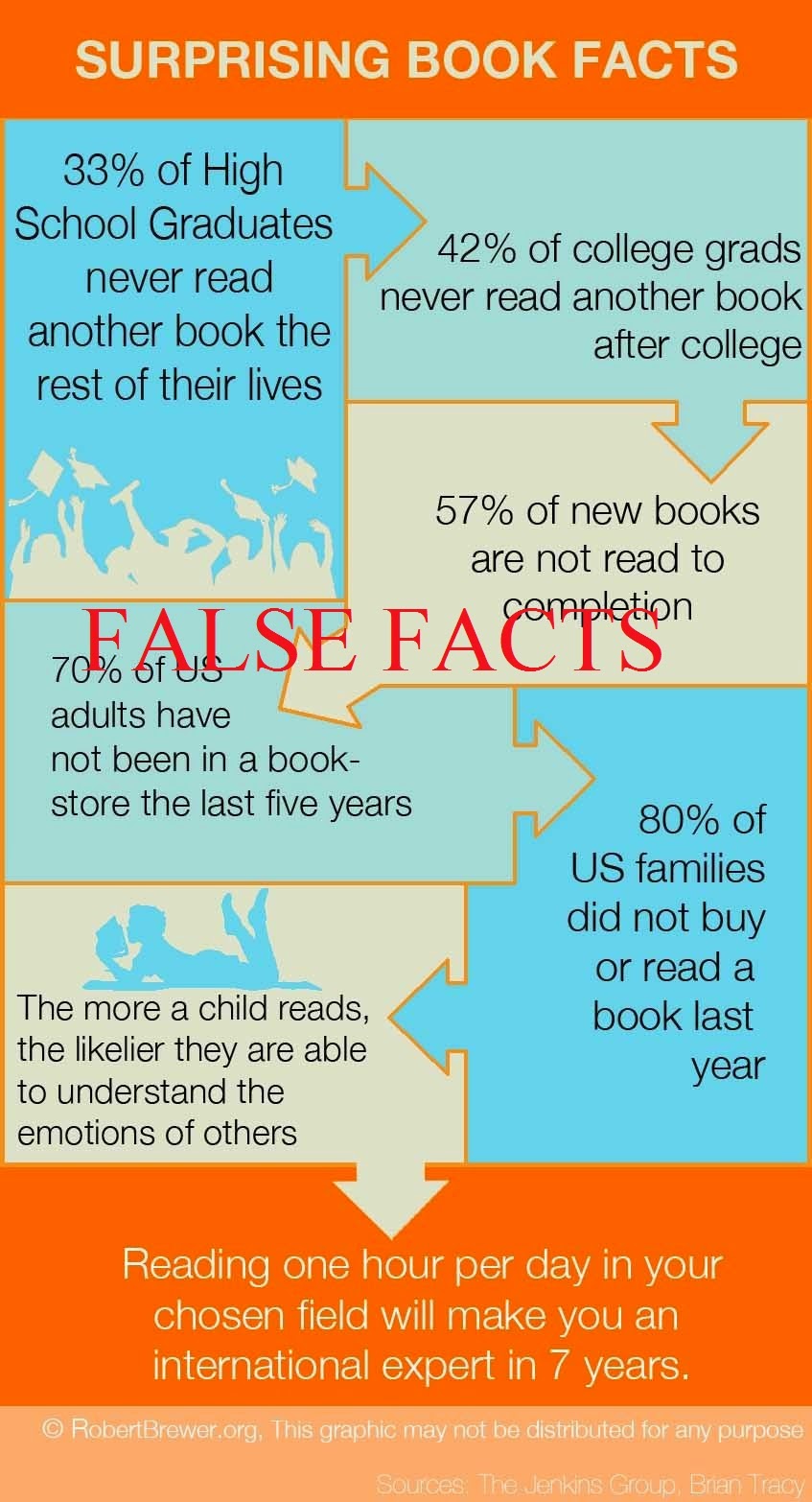 The infographic was created by Rob Brewer in in 2012, later realising the errors in the original he created a new one:

Since the new one are far less surprising and far less emotive than the original, guess which one still gets shared around?

Rob Brewer notes where the original statistics come from and why he now thinks they're dubious on the page above.  Here's an more detailed look at it from a link on his page.

The stats come from a speech given by Jenkins in 2003, so wherever possible, 2002 statistics are used below.  It's important to note that however accurate the statistics in the speech, the speech was to industry people about the industry.

Claim:
Statistic:
The 62.3% comes from inverting the statistic 37.7% had read in the last 12 months (so is slightly problematic).  37% seems like a badly rounded and misquoted 37.7%, but could just be a coincidence.  But in the last 12 months not in the rest of their lives which are two very different claims.  It's difficult to say for sure with this one if two surveys with wildly different results or a mistakenly inverted result of the same (but misquoted) or similar survey.

It is estimated that 30 - 40% of books are returned to publishers and that 65 - 95% of those are pulped, which means 19.5 - 38% of all new books are pulped.  That leaves 5 - 23.5% of purchased new books unread.  Frankly, I think that's unbelievably high.  There are whole ranges of books that aren't meant to be read to completion: Cookbooks and DIY books, reference books, coffee table books, certain text books and certain religious texts. That leaves no rooms for the books started but found unreadable, unwanted gifts and  books people were just too lazy to finish.  So even 23.5% is an incredibly low number, and since we don't know why the books aren't being read, it says nothing about literacy.

Result:  Probably too low, but meaningless.


This is a number that can only be derived from surveying people, and those results can vary greatly depending on a number of factors.  I can't find any numbers on this one, so we'll allow that there may be some truth to it.  Although Amazon was founded in 1994 and was a success in 2002, it still wasn't big enough at that stage, I think, to explain this number.  However, it's not a useful number in the literacy discussion at all.  For the audience of the speech, it was important, as it talks about the importance - or lack of importance - of bookstores as a point of sale.  There are many other venues for buying or getting hold of books.  Buying them in department stores, borrowing them from libraries, sharing friend's copies, stealing from wizards' houses,   Where you get them says nothing about literacy.  I avoid clothes shops, I still wear clothes (mostly).  Personally, I visit bookshops whenever I get the chance.  I hardly ever buy anything and spent a long time after my degree in English Literature not reading - but still visiting book shops.  This is really a statistic to horrify people who love books and who can't walk past a bookshop.  Today, however, the truthiness of this statistic (whether real or not) has lead to bookshop closures...


The use of "families" is weird.  It seems unlikely that no one in an entire family would read a book in 80% of families.  Breaking families down into individuals gives us some very different results:

This one isn't statistic, but the hypothesis does exist and studies have been done.  However the studies and conclusions are questionable and are usually reported and rereported without being questioned at all.

Reading to be an "international expert"

Attributed to Earl Nightingale, a motivational speaker.  Motivational speakers are full of empty claims to motive people and the basic assumption behind this is clearly false.  If this is true instead of a 3 year degree you could just read 2 hrs 20 minutes a day for 3 years and not just reach degree level but become an international expert.